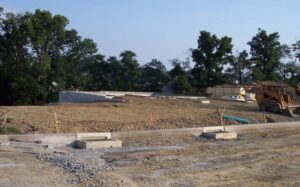 We’re on a crusade against unnecessary exterior steps, and most houses have them.

How do you eliminate exterior steps to at least one main level entrance? Shortest answer assuming new construction, site work in combination with moving the house up or down. For retrofits, you’re limited mostly to moving dirt or finding an alternate entrance (like through a garage, carport, etc).

The lay of the land determines your options and, in either case, you simply need to plan. If you’re dealing with more than a three foot rise, then it’s going to be tough but not necessarily impossible.

Otherwise, you grade for a gentle slope to the door, which might include a switch-back and/or retaining wall (think pavers for landscaping), not less than a 1:20 ratio (i.e. maximum slope of 1 inch rise per 20 inches) over the pathway, known as a “walking ramp” or earth berm because it doesn’t require railing or curbs. (The slope of literal ramps shouldn’t be less than a 1:12 ratio.) But higher the ratio the better assuming the lot isn’t ideally flat.

Sometimes it’s instructive to describe what’s typically done and visualize the solution as doing the opposite. So let’s pretend a house built atop a full basement. Typically the builder digs a hole, pours a basement, plunks the floor joists ATOP the basement walls, constructs the house and builds steps up to the front (and often every other) door. Fast, easy and very little if any forethought. 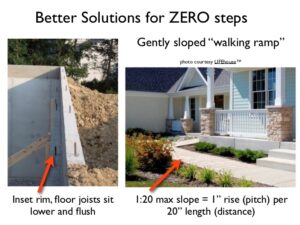 Same scenario except plan for a zero step and flush threshold entry, we gently grade to the entrance, flatter the better. One method of “lowering the house” is using an inset rim atop the foundation walls, which only amounts to pouring an extra course of concrete, and placing the floor joists lower WITHIN the basement walls atop the inset rim.
Finally, every situation has its own problems to solve but we’re not talking rocket science. If worse comes to worse, explore alternate routes, like through the garage; however, simply slapping up steps everywhere is lazy design and construction and can be avoided in support of maximum convenience and safety if the architect and builder merely pull on their thinking caps.